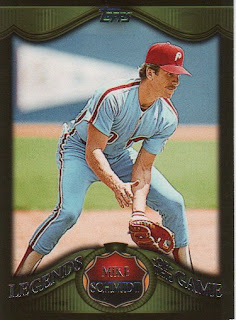 I'm still pretty behind in posting trades and Ebay purchases, but I'm still plugging away. Typically I would also show more than just one scan but the cards have already been integrated into the collection and I was plain old just too lazy to scan them in. So, with that being said, I present my trade with Scott from Hand Collated.

And a card of a hockey goalie that my daughter was super happy to receive and has since been put into her special box of cards.

Thanks again, Scott, I've got some cards set aside to send out to you. And if you haven't already, check out Hand Collated.
Posted by Amy at 7:35 PM