I've come to terms with the fact that the Phils have clinched their first losing season since 2002. I'm okay with it, I swear. Honestly, I'm a pretty optimistic person; glass half full and all that. So while I might be crying into my Wheaties about the losing season, I do have at least one thing to smile about.

Last night we served those fish faces their 100th loss. I'll admit that it's a bright spot in an otherwise disappointing September.

So, while I was planning what to write about in this post (planning??? what is that????), I did a little research (research!). Way back in the dark ages of 1997, when the Marlins were from plain old Florida and not all fancy and from Miami, we traded some guy named Darren Daulton to them for Billy McMillon.

I wish I had a Billy McMillon card to show you, but alas, he seems to be missing from my collection. (Instead I included good ol' Lenny because in my mind Daulton and Dykstra go together like peanut butter and ladies) So far, I've catalogued 1,324 Phillies cards and not one single one of them is poor, old Billy. This lead me to do a little more research (seriously, I must be sick or something). Apparently, Billy has 13 cards from 97/98 that picture him as a Phillie. I still have a lot more cards to go through, but I somehow can predict that nary a one will show me Mr. McMillon's smiling mug (full disclosure: I have no idea whether or not he smiles on his cards; I've never seen one). I may have to break down and buy one just to say I have it. Otherwise, how can I sleep at night knowing my collection will never be complete until I obtain a 1998 Donruss Billy McMillon card?

Well, happy Friday! Today is my Friday off, so I thought it would be a good time to actually update the blog with some of the things that have been going on around these parts. Let's jump right into the good stuff before I start off on some unrelated tangent.

This lovely specimen came to me via Sports Card Forum. I think I bought it for $5.50 dlvd. A steal, I tell ya. This scan does the card no justice; it is nice and shiny in real life. I love autographs. I love it even more when a player has nice penmanship. Must be the former teacher in me. Freddy here is definitely not the worst I've seen and not the best. I can make out actual letters, which is a plus. I imagine when you are signing pages and pages of stickers it gets a little tiring. It would be interesting to compare how the signature deteriorates from the first sticker signed to the last. (At least I think it would be. Maybe I'm just weird) Anyway, I enjoy that he added the little #13 at the end. It's the little things.


Moving on, here are four Mike Schmidt cards I picked up at the card show last weekend. The first 3 are pretty standard, you've all probably seen them a million and one times before. The last one is one that I had never come across before. So I used my awesome powers of Google-fu and looked it up. Turns out that this comes from a 9 card set highlighting Schmidt's career. They were inserted 1 per in 1994 Ted Williams jumbo packs. If anyone has any more of these cards, let me know. 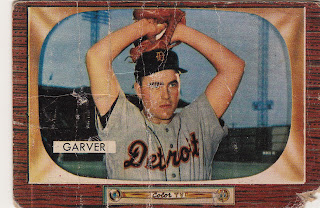 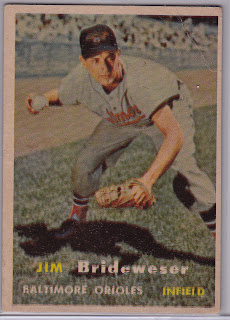 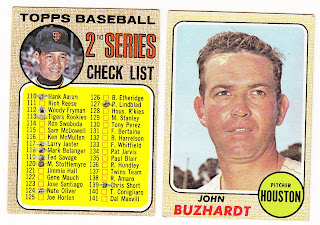 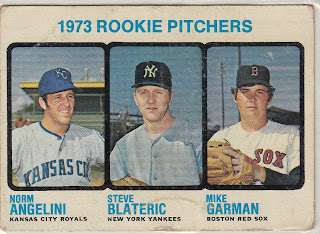 Above are the random vintage cards I picked up at the aforementioned card show. I didn't pay more than a dollar for any of them, in fact most were a quarter or fifty cents.

Thank goodness that is over with. Now I can finally move these cards from my desk into their respective homes. As I get back into the swing of blogging, hopefully posts will happen more than once a week. I can't promise anything though. There is a lot of behind the scenes action going on here at them moment. I'm in the middle of reorganizing the cards to make it easier to see what I need and what I have. I'm working on wantlists and tradelists that will hopefully be at least partially posted this weekend. You know, all the normal stuff.

As always, if you have anything you think I might like, feel free to drop me a line at amster82@yahoo.com. Also before I forget, I think I fixed whatever was wrong with the comments, so if you tried to comment and couldn't I apologize.

Ok, "girl" might be pushing it these days, but anyway. (I mean, I am of the female persuasion; however, I think I am fast encroaching on "lady" territory. Now, stop getting me off track or I'll never get this post written.)

Where was I? Ah, yes, card show. I did, in fact, walk into a card show this past weekend and walked out with a nice stack of cards nobody else wanted. First, you have to understand that I avoid any and all "high dollar" items. And by "high dollar" I obviously mean anything over a literal dollar. I sniff out quarter bins like a dog sniffs out stuff that dogs like to sniff. I'll gladly peruse through boxes of other people's junk.

To get straight to the point, here's some of the junk I found. I'll have to do a part deux of this post because I am too lazy to finish scanning tonight.

A lovely trifecta of 1981 Donruss cards featuring Mr. Pete Rose. I had no idea that Pete had this many cards in the ol' 81 set. I also have no idea what my scanner did to these cards, but the edges don't look so wonky in real life. I know you were probably worried. And, as an added bonus for you, a casual observation -- it's a good thing that Pete has all that beautiful flowing hair, because that batting helmet doesn't look like it would protect him in a pillow fight.

Say hello to Howard, Halladay, and Hamels (oh my!). First, up is Ryan Howard on a 2007 Topps Stars card. Even though I was still collecting back in 2007, this is the first one of these cards I've seen. Eh. Let's leave it at that; even I, queen of all cards shiny and gaudy, can't find it in me to think this card is all that aesthetically pleasing. Next up, is a double shot of the Doctor. A 2013 base card for my team set and my very first Gypsy Queen. Now, I've been pretty vocal in the past about my dislike of the Ginter sets, but the Gypsy Queen stuff is growing on me. Full disclosure, I have opened exactly zero packs of it and am basing my opinion solely on this one card. I also really enjoy that Roy is immortalized in a chicken-esque dance pose. Being from Pa. Dutch country and all, the chicken dance holds a special place in my heart. Rounding out the post is Cole Hamels on a Starquest card. A Gold Rare something something, no less. I don't know what that means (Geez, I've been saying that a lot lately), but it's slightly shiny and that could be a goldish background. Is it actually rare? Do I care enough to look up any information about this card? Not so much and it cost me a quarter.

Stay tuned for an unresearched, poorly written Part 2 Post. What's in store, you ask? Schmidt, Carlton, and some beat up vintage (non-Phillies! I am a sucker for any card that's marked $.25).

First Trade Since Being Back

I am super happy to record my first trade since falling off the wagon - er, I mean, getting back into collecting again. This trade comes to me from a user named Mike on Sports Card Forum. (If you want to look me up there or be my friend or just stalk my sadly small number of posts, my name is PhilsFaninNY)

For the price of a couple 2013 Topps inserts I scored a couple Phillies for my collection. 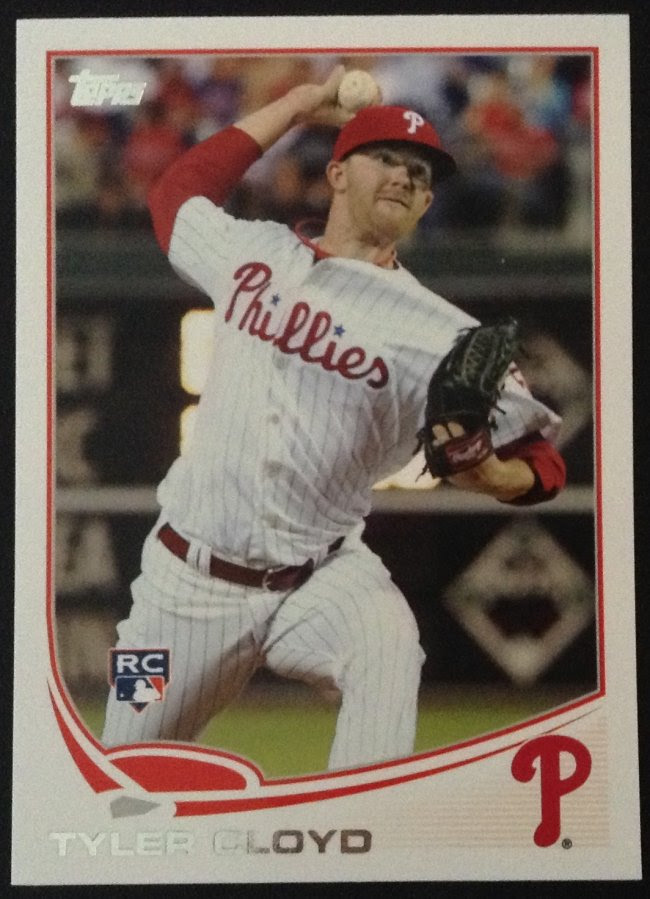 Why, yes, that is a 2013 Topps Tyler Cloyd RC. It was just announced today that Cloyd would take Ethan Martin's spot in the rotation effective immediately.

These next two might look like the exact same card, but I would have to tell you that you are sadly mistaken. Well, not really. Technically, I guess they are the same card, but the one on the right is... wait for it... HOLOFOIL! I don't know what holofoil means other than it makes the card extra shiny and that makes me extra happy. You may remember from my initial tenure on this blog that shiny cards are my favorite. The shinier the better. That has not changed at all; in fact, the shiny love may have even gotten worse.

In other news, The Great Card Re-Organization of 2013 is still underway. I'm knee deep in cards and don't seem to be getting anywhere organizationally wise, but I'm having a blast sifting through all the boxes of cards I've neglected for the past 4 years. I promised the spouse that I would get rid of some, so if there is anything you're looking for let me know. I'm also working on updated wantlists and tradelists, so stay tuned for that, as well.

Whoa, has it really been 4 years since I've posted here?

Let me repeat that for emphasis. 4 years???

Wow, so I guess I should make some sort of excuse for my terrible blogging habits. Um, I moved to Long Island. That's right, Met's country. With a smattering of Yankees fringe groups hanging around. I'll tell ya, it's painful. The cards got packed up in the move and just never got unpacked, I guess. A 4 year break from collecting; I thought was officially over the addiction. Well, a couple of weeks ago we started cleaning out the attic to get rid of stuff and I decided to pull down the boxes. That's exactly where I went wrong... Once I got my dirty mitts back on those cards I knew I couldn't part with them and the pack ripping, shiny card loving bug bit me again.

Which brings us to the present and this blog. I think I'll start posting again, if it's all right with all you non-existent readers. So, get ready for some cheap wax, junk cardboard, and Phillies fun (phun?). As always, if you have any Phillies cards that are burning a hole in your pocket or you're just sick of looking at, I will gladly give them a good home. And I might just have something special to stick in the mailbox for you.