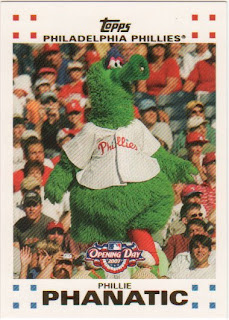 Like most kids, the best part of a baseball game for my 7 year old daughter is the mascots. Luckily for us, the Reading Phillies and Harrisburg Senators (the two minor league teams we frequent) have, at least it seems like, about 5,000 mascots between the two of them. These mascots have autographed everything from hats to shirts to balls and everything in between for us. And we, Abby especially, appreciates every single one. But the end all, be all of mascots is of course the revered Phillie Phanatic. The Phanatic is as much a part of the Phillies as Richie Ashburn or Mike Schmidt and has been since being introduced in 1978. I've never known the Phillies without the Phanatic. Which is what makes this card so essential to my collection.

This specific card (which reached me by way of Collective Troll) is from the 2007 Topps Opening Day set. In the grand scheme of things there is nothing incredibly special about this card -- it's not a certified autograph, or game-used jersey, it has no bright green hair strands encapsulated within it (how cool would that be, though?) -- but it captures the Phanatic in his natural element of entertaining the fans.

BTW, if you're interested...
...the Phanatic stands at 6'6" and weighs 300 lbs.
...he hails from his homeland of the Galapagos Islands.
...I'm not actually sure what he is, but Abby likes to think he is some weird green anteater.
Posted by Amy at 11:06 AM

Labels: card of the day, mascots