A Trip To The Card Store and a Pack Break

I took a trip to my local card store today to pick up some storage for my big organizational project and also grabbed 3 packs of 2009 Topps Series 2. They were lacking any other enticing packs so 09 Topps will have to quell my desire to open some packs. I'm not putting together a set, only looking for Phillies, so any cards are up for trade to anyone who wants them. I'm also only going to open one pack today and save the other two for later posts. So, here goes...

1. Joe Mauer (according to the back of the card, in 2006 Joe had the highest avg by an AL catcher in the last 70 years -- .347)
2. Mike Aviles (what is up with the badly Photoshopped rookie cup? Couldn't they make the bg transparent?)
3. Bill Hall (the first serial numbered card I remember owning was a Flair rookie of Bill Hall, and I thought it was the coolest ever for like a year until I had so many serial numbered cards that I couldn't give them away)

4. Mike Hampton
5. David Justice Ring of Honor insert (I don't think I like these inserts. This is the first one I have pulled and they are kind of ugly)
6. Robin Yount Legends of the Game insert (I do like these inserts, except the black bar across the top and bottom. They should have continued the green all the way to the edges)

7. Prince Fielder Toppstown insert (he sure does look chunky in that picture)
8. Randy Wolf (a former Phillie is better than no Phillie at all...not really, but it made me feel better to say that)
9. Willy Aybar 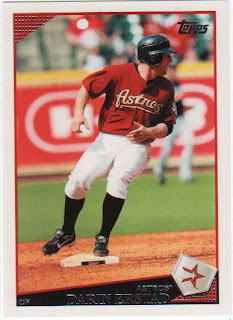 Ok, no Phillies, but I did get a former Phillie and a HOFer, plus 2 other inserts. Not a total bust of a pack, but nothing to write home about either. Hopefully the other two packs yield better results.
Posted by Amy at 3:43 PM