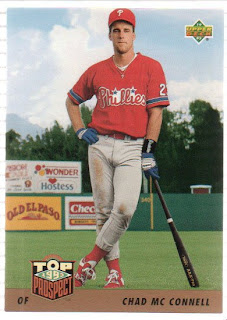 Be forewarned...it's hot today. And at 7 months pregnant this does not make me a happy camper. That being said, I pulled this card randomly off of the top of a pile of cards that have not been organized yet. No thought or pre-planning was put into this post at all today.

Apparently, Chad McConnell was a "top prospect" back in good ol' 1993 -- at least according to Upper Deck. I can honestly say that I wasn't paying much attention to the prospects back in 1993. After seeing the smug look that Chad is giving the camera, I felt the burning desire to delve deeper into the mystery.

After 2 1/2 minutes of extensive research, here's what I discovered --