I love when cards I have sitting in a box in the corner finally find a home that will love and appreciate them in ways I never could. This recently happened with a stack of Red Sox cards that I happened to have sitting around. In return, I received quite an assortment from Adam over at Thoughts and Sox. 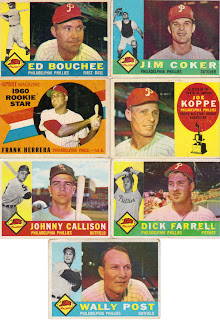 Like everyone who has eyes, I love the 1960 Topps set. I love it more when it has a Phillie on it.

Keeping with the trend, he also sent some nice "retro" type cards. I like the OPC set, and the Bowman Heritage is a set I wish they would have continued, but Goudey is a bit scary. Mr. Rollins is not nearly as bad as some of the art I've seen though. 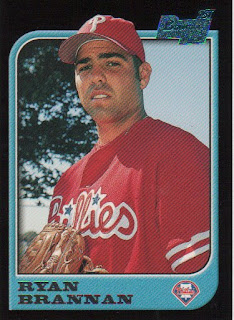 Wow, a Bowman card from waaaay back in 1997. For the life of me I had no recollection of Ryan Brannan, so I turned to the ever faithful Baseball Cube for some info. Apparently Ryan spent 3 seasons in the Phil's farm system, making it as high as Scranton/Wilkes Barre (AAA). And now you know...and knowing is half the battle. 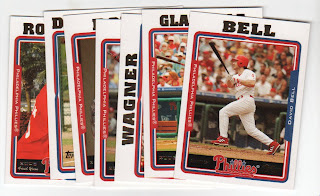 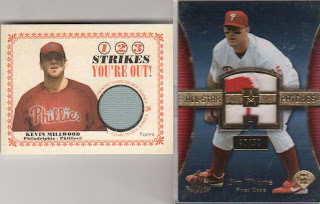 A nice jersey for my 2004 Cracker Jack set and, what I believe is, my very first Phillies patch card -- a magnificent piece from Mr. Jim Thome.

Thanks again for the trade, Adam! And if any of you have spare Red Sox you want to part with, be sure to head over to Thoughts and Sox.
Posted by Amy at 3:48 PM